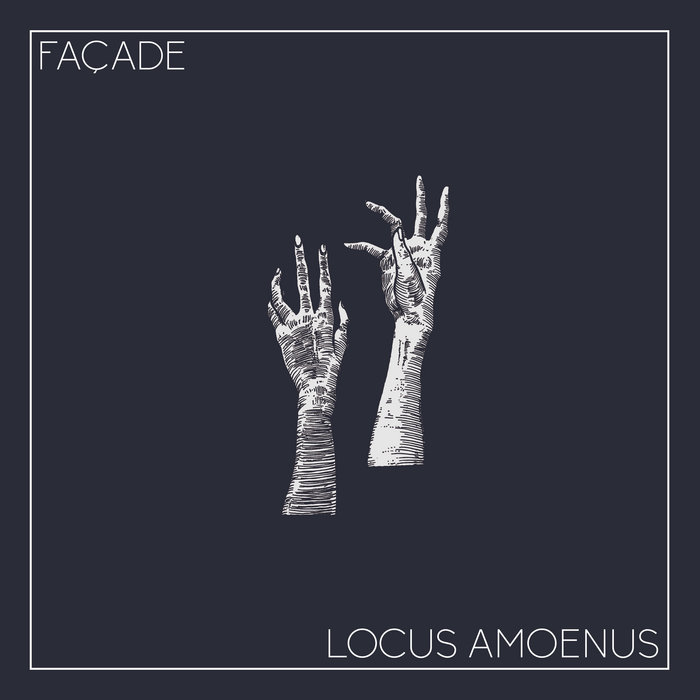 This CD is a joint effort by Dutch Doom acts Façade and Locus Amoenus. When I was younger, I always used to be a fan of this type of release because it meant getting to know two new bands at once, and that particular enjoyment has never really left me despite now being considerably older!

Façade play the heavier music of the two bands on this release via chugging Death/Doom contributions. There's a lot of power in it, as you'd expect, but not a great deal of subtlety. The crashing riffs and growled vocals are particularly good but I almost feel like they've missed a trick by not paying more attention to the atmosphere generated. Unlike some Death/Doom acts, they don't play with sharp bursts of Death Metal so I'd have thought they'd have placed more focus upon the atmosphere than they've done.

Still, when it comes to technicality or vocals, I can have no complaints. It's certainly nothing that is unpleasant on the ears. I just thought it sounded a bit flat in terms of variety. The potential is there, though, so I was pleased to encounter them here in spite of repetitive elements.

On this release, Locus Amoenus play a Black/Doom style with tortured vocals, which suits me just fine. I was a little concerned at the start of their tracks because they'd put together a reasonable intro, and considering that their contribution to this split is two songs that clock in at around 16 minutes, I wasn't sure it was the most prudent of moves. However, it added a sombre tone to the song that simply wouldn't have been there otherwise so it made sense in the end.

Vocally, Locus Amoenus's contribution was excellent. The screams were of utter anguish and thus lent the songs a great deal of passion and anger. I felt that they complemented the music very well indeed.

Musically, Locus Amoenus did relatively well. Sometimes I felt that their music became a bit too choppy for my liking, if that makes sense. For example, a couple of minutes into 'Alea Iacta Est', the vocals are suddenly asphyxiated by furious drumming and fast guitar play, which didn't really suit the mood of the track. I felt it was supposed to be more of a pondering piece than a gung-ho assault on eardrums. I also felt that sometimes the drums sounded a little too low in the mix, which isn't the end of the world in terms of the atmosphere they were attempting to generate but it's still something to be wary of, as was their occasional "tinny" sound.

Overall, I did like what I heard from Locus Amoenus and I will keep an eye out for them in the future as a result. I especially liked how their guitar work kept their songs from being all about the tortured vocals, which otherwise would have been much akin to a lot of acts out there. As a result, there was a distinct "emotional" feel to the music that I enjoyed. For their ability to leap between serene and anguished, I'd loosely compare them to Monarch, albeit with much more focus on their atmosphere than the French Sludge/Doom act.

Out of the two Dutch bands, I did prefer Locus Amoenus's contribution. I thought that the two bands dovetailed rather well, given their contrasting styles. My sole criticism of the release as a whole is that it's a touch short, particularly when you factor in that this is in fact a limited release. Part of me thinks that some people might want more for their money, assuming that the prices are slightly higher than usual because of the limited availability. Still, I enjoyed discovering these two bands and I'd like to think that there's something on this split to appeal to most Doom fans.