Pilgrimage Of The Imperator 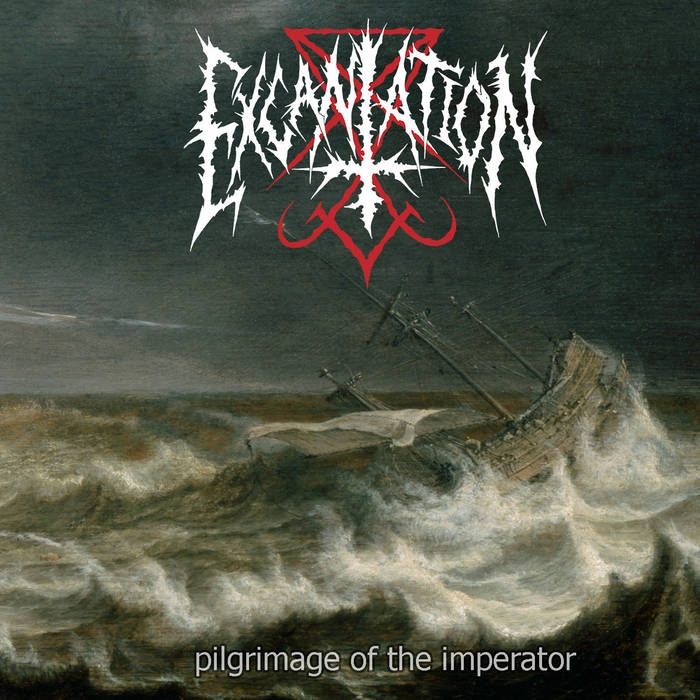 From hot, humid San Antonio, Texas, come Funeral Doom behemoths Excantation, with their sophomore full-length release, 'Pilgrimage of the Imperator'. Sun-drenched their home town may be, but their dirge-like soundscapes are darker and colder than the inside of a Reykjavik sarcophagus on a particularly bleak January night. Through four bruising, epic tracks - each one clocking in at approximately ten minutes - Excantation deliver a lesson in the expression of pure undiluted sorrow. A musical tunnel without even the slightest chink of light no matter how far ahead you look; a crushing, monolithic beast that will extinguish any spark foolish enough to dare attempt to kindle in its presence.

Opening track, 'Insurmountable Lapse', sets the tone of the album with the subtlety of a falling tombstone to the face; bleak, punishing and brutal from the very first seconds. A down-tempo dirge of droning distortion and melancholy synths, with bellowed vocals harsh enough to strip the paint from a brand-new coffin, it drags the listener into a world of wounded feelings and endless lamentation. Lyrics are largely unintelligible, but the anguish of the delivery, and the grinding, synth-laden music paint an unmistakable picture; monochrome and frightening, bled of all colour to create an unsettling, but fascinating atmosphere.

Tracks merge seamlessly as the album progresses, often making it difficult to easily ascertain where one ends and the other begins. The result is four roughly equal songs that combine to create something greater than their individual parts; one long, well-balanced funerary voyage over the edge of the abyss. Moving along at a slow, imperious tempo, it brought to my mind Paulie Cicero, the mafioso colossus of the Scorsese movie, Goodfellas, who, film buffs will recall 'may have moved slow, but it was only because Paulie didn't have to move for anybody'.

'Pilgrimage of the Imperator' not an album that will necessarily hook the listener on first listen, but it will reward further listening. It can feel impenetrable at times, but with repeat listening, ideally to the full album in its entirety, nuances will reveal themselves, and the crushing trip to the darker parts of the human soul can be fully appreciated. I, for one, am already looking forward to listening to this album on a late autumn evening, as the skies bruise and darken and the first bite of winter chills the air. Mistralth's superlative 'My Grief' was my album of choice for the winter months last year, and already, as the summer is still heating up, I have a definite contender for this year. It's not an easy listen, but on this sophomore release, Excantation have demonstrated poise and confidence, and created an album filled with sombre grandeur. Grim and uncompromising from its brutal opening seconds to an ending so abrupt you'll wonder if your cd player, or whatever other device you may use to feed your Doom addiction has died, it's a deep, powerful expression of Funeral Doom. According to Excantation's Bandcamp page, they're hoping to put this out as a vinyl release; it's a format I definitely feel would lend itself well to the sound and structure of the album. Put me down for a copy.