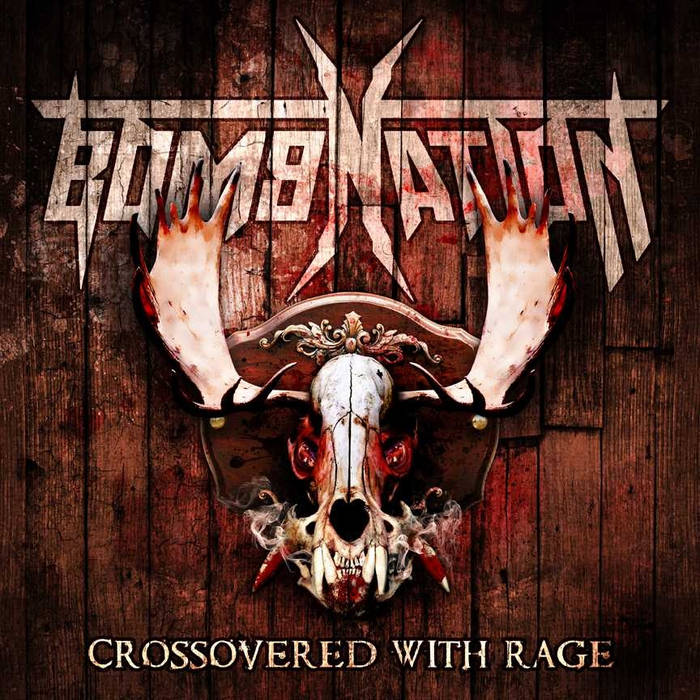 CROSSOVERED WITH RAGE REVIEWS
thrashhead.com
Second album from this Quebec City, Quebec Canada thrash/crossover band and still as good as I had hoped they would be. This time you get a self released thirteen song album from them or you can get a split album from them and Blunt Force Trauma that can be bought here. I am just going to review the self release from Bombnation which has an extra four tracks not on the split release.
This band just gets better and tighter at what they do! The band just bashes away behind the great vocals of Mike Waters who just screams and wails throughout this release just perfectly. This band has just enough metal mixed with punk/hardcore energy that it is a treat to listen to these guys from my home country. The power and the energy that these guys put out really is quite an experience and one that gets replayed in my house often.
Great production, nice and clear, but with enough rough edges to make it great. The songs range in time from a high of just over three and a half minutes, to the shortest at just under one minute and a quarter. These guys know how to fill the songs with just the right amount of time to get the point across without all the long wanking of some of the bigger bands, and for this I am glad. They are coming out with another album sometime in early 2013 and I can’t wait, just send me the hard copy, please!!!!!! Check them out at Bandcamp, Facebook, Reverbnation and their official website.
www.metal-observer.com
Thrash Metal bands have certainly come out in sheer mass lately, but Crossover still seems to be the underground mental case it always was playing in the undercurrents of the style. Although MUNICIPAL WASTE and to an extent GAMA BOMB were able to garner some larger success in the style, the rest are bands one have to dig for to find. Just like BOMBNATION’s sophomore effort “Crossovered With Rage”. It’s an album that does nothing to venture from Thrash and Punk’s bastard child of sound, but ably displays some of it at its best too.
One thing that BOMBNATION is able to cohesively do is pour energy out of every single part of “Crossovered With Rage”. Whether its the wrist breaking riff speed, the flurries of melodic leads, the bass structures, or the neck snapping drum pacing (with that now all important snare pop and cymbal one-two) these Canadian Thrashers are laying it on thick. To be honest, it’s the energy that sells Crossover and this sophomore effort does it admirably.
Even if musically BOMBNATION isn’t adding a lot of new things to the mix, the writing on “Crossovered With Rage” is solid. The vocals throw in more of a pure Thrash style with its Punk shouted basics and occasional shrieking notes. Adding in a slew of great group chants on some of the shorter tracks like “Bastard Muesces” and some mid tempo moments (short moments of course and the song “Mental Room”) and “Crossovered With Rage” sparks some fun, energetic music that just catches the attention of its listeners.
“Crossovered With Rage” might not be anything new, but fans of the previously mentioned larger acts are going to devour this band up with fury. This sophomore effort sparks with efficiency and knowledge of the genre that inspires a middle finger in the air attitude with headbanging results. Highly recommended for Crossover fans!
Songs to check out: “Green Machine”, “Phospho Sasquatch”, “Mental Room”.